PPhotos and captions by students and Ms. Horne.
Thank you to Bill Wygal and the employees of BILL'S ACE HARDWARE in Pleasant Hill and Concord! A reef tank requires a lot of plumbing supplies and Bill's Ace donated what we needed! You will see more of the Concord store's tubing stock in later entries! 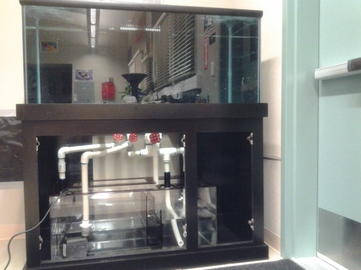 March 28, 2015, 10:00PM.
Thanks to the expertise and efforts of Russ W. we got the tank plumbed and test water circulating! No leaks! Tank geeks - the DSA 105 Pro is reef-ready with a 5 gallon center overflow with four drilled holes. We plumbed a main drain to the Trigger Elite sump, another to the separate refugium intake, the third to a Herbie-style emergency drain and the last is the pump return. Nearly silent operation! Next tasks include adding the skimmer, circulation pumps and lighting.

April 6, 2015
Saltwater is circulating in the tank, 80 pounds of bagged Iive sand from DIABLO CORALS is starting our sandbed and the skimmer is breaking in over the school's spring break. Hopefully before next week's arrival of live sand and base live rock I will be able to change the pumps for the main return (too noisy) and the skimmer (too much flow and too tight in the sump) and split the LocLine returns (strong flow disturbs sandbed).
The PAUL G. ALLEN FAMILY FOUNDATION provided supplies such as salt mix, heaters and pumps through their Teach for the Planet innovation contest at DONORSCHOOSE.ORG.
Students acclimated the "clean up crew" of tiny blue-legged hermit crabs, turbo snails, two large peppermint shrimp, sand-sifting starfish and four sea cucumbers. There are also three anemones! Hitchhikers in this shipment included several tiny urchins, many porcelain crabs and two mantis shrimp (but one molted and died). 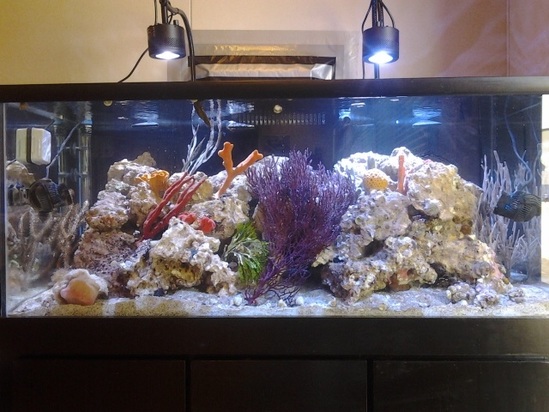 What a colorful habitat we have! The rock is VERY LIVE. We are so grateful to Richard at TAMPA BAY SALTWATER for sending us so much incredible life. We observe more creatures and behaviors every day! The reef is a living habitat that is constantly changing. Sometimes we hear a muffled "pop" and wonder if it is a pistol or mantis shrimp. Mysteries like this are part of the fun of a reef tank! ***See the Gallery for more photos.*** 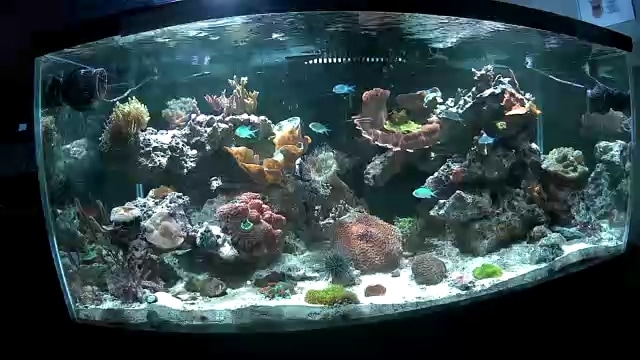 2/3/17 FISH! 6 fish called Chromis added. They like to stay together. We will observe their behavior and take care of them and hope the anemone does not eat them. We will also get more fish. Picture is distorted because we took it with the webcam. Update: 2 chromis disappeared. Then another. We suspect the anemone! We will set up a little Caribbean biotope tank and get him out of the reef tank.

We need to reorganize some stuff to be sure there is no fighting between corals and so you can see everything. 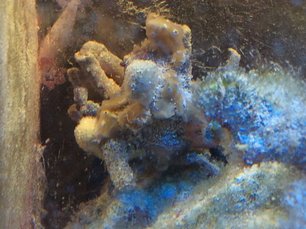 Unusual crab covered in sponge! He looks exactly like the rock and sediment in our old clown tank! It was supposed to become an Aiptasia anemone observation tank, but now we might make it a Florida-Caribbean tank. Our teacher is seeing if there is enough light for gorgonians, sponges, and rock anemones. Once we saw it hanging from the powerhead screen eating algae. We don't know how it got up there. This is the weirdest crab and so cool. CRAB DIED in 06/2017 heat wave. Ms. Horne jarred it in alcohol so we can look at it. 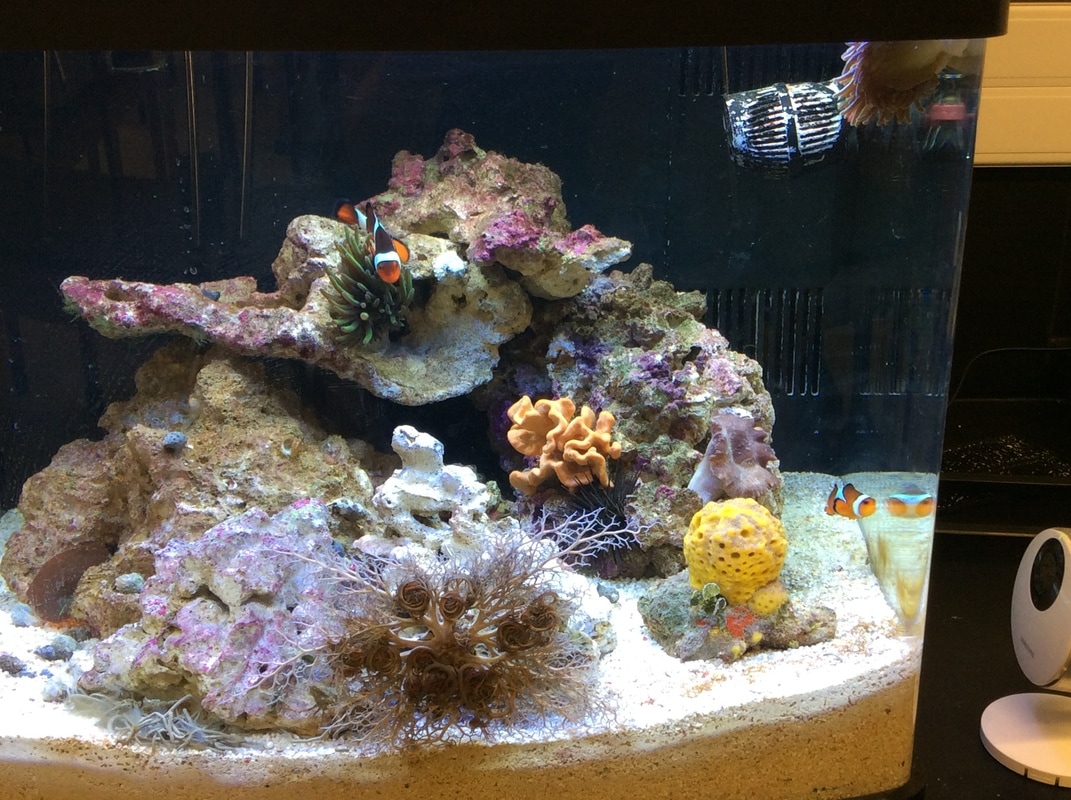 "What the heck is that?" says the clownfish. Basket star! It is related to brittle stars. Also new is orange and yellow sponges, snails, and hermit crabs.